We are looking for some people to help us transport essential goods by 4×4, as it is cheaper to organise the trip using this type of transport rather than a container ship.

This September, a team of 5 qualified Protection4Kids volunteers went on a humanitarian mission in numerous refugee camps in Greece, like Corinth, Malakasa, Eleonas and Schisos.

This experience has brought about the beginning of a collaboration program with the refugee camp of Lavrio.
‘Program’ because, differently from ‘Project’, which has a beginning and an end, a program is constant and long term. Our volunteers have informed us that 400 refugees of the camp are in need of medicine, clothing, and school supplies for their children.

This is the reason for which a new shipment organised by Protection4Kids will be sent on November 7, to provide the refugees with these necessities and to organise some recreational workshops inside the refugee camp

Presently we are collecting:

Computers aimed at the creation of a computer area

If you are interested in contributing to the collection of these goods, send us an email at info@protection4kids.com and organise yourself with our Team.

Every person will personally distribute the collected goods to the camp’s refuges, respecting anti-Covid regulations. Furthermore, the participants will have the possibility to take part in some empowerment workshops for the refugees. The Protection4Kids team will also bring IT equipment in order to better communication and the management of the centre.
The professionality of the participants (doctors, nurses…) will be taken into account for more specific volunteer work inside the camp. 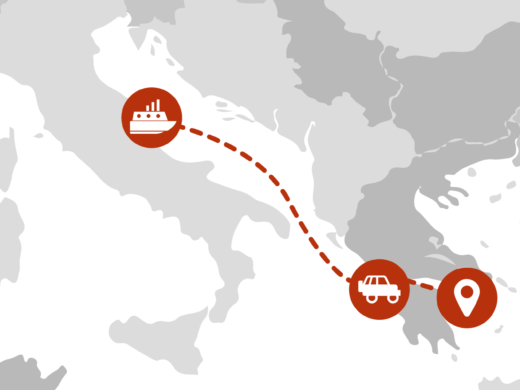 The meeting point will be at the Ancona port from which the convoy will leave to Patrasso, 270 km from the final destination.
The journey is characterised by coastal, inland and dirt roads, and enchanting views.
In the end, the group will reach Lavrio, a city situated in the South-East part of the Attica, 60km South-East of Athens. This historical town became famous in the classical times for its mines of silver. These were re-discovered at the beginning of the 5th Century BCE and became one of the most important sources of wealth of the Athenian State as well as the basis of the Athnian hegemony on the Aegean SEa.
During the week there the participants will be involved in off-road day and night trips, driven by expert locals.

The Kurdish camp of Lavrio, about an hour from Athens, hosts about 280 people, 42& of which are minors. The adults present are divided between refugees and Kurdish political activists coming mainly from Syria (41.43%) and Afghanistan (26.43%).

The peculiarity of this camp is the fact that it is internally self-organised by the inhabitants, who follow the principles of democratic confederalism, based on the Rojava model.
Claudia Manzone, our colleague and volunteer in Greece describes it:

When we think about Kurdistan, we think about separatists demands and the fight against terrorism. The reality of the Lavrio camp differs from these normal narrations and revises the experience of Rojava, although in a limited way.
This experience is characterised by great ideals which we typically, and sometimes exclusively, associate to the West. But thinking femminist is thinking Kurd!
Thinking about a society of equals, which are so thanks to the welcoming of differences, be it sexual, religious and of origin.
‘Women and men are same’ is an apparently average and vague concept, but, when it is born in an environment notoriously obstructive to a feminist management, it can assume a different strength and, at times, violence.

Departure at 17:30 from the port of Ancona with the Minoan Lines ferry. Meeting point at the port at 15:30

Arrival at 16:00 at the port of Patrasso and transfer to the accomodation at Lavrio

Morning: delivery of the material at the Lavrio camp
Afternoon: presentation of the project by Annachiara Sarto and Claudia Manzione

Recreational camp inside the Lavrio camp.